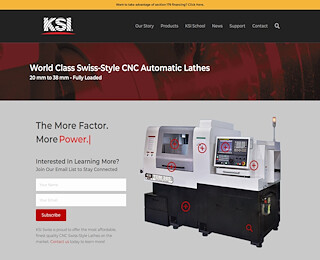 Key Advantages Of The Swiss Machine

Generally, lathes come in various designs based on the intended application. But as a specific design of lathe, the Swiss-style lathe is basically designed to provide extreme accuracy. The Swiss-style lathe secures the workpiece with both a guide bushing and a collect. Before highlighting the benefits of the Swiss machine, it is important to understand how it works.

How The Swiss-Style Lathe Works

Conventional lathe machines are typically known to have fixed headstock. In this case, the workpiece which extends as a cantilever right into the enclosure of the machine is often held in a collet or chuck. It can also be supported by the tailstock right on the end. However, this is not the case with the Swiss machine.

When working on a Swiss machine, there are certain benefits to enjoy. First and foremost, it operates with a movable headstock. The chucking collet in the headstock allows for the free passage of bar stock. There are lots of cutting involved at this point. To this end, it is important to make the headstock as robust as possible.

During machining, the bar which will be located outwardly will have to go through a guide bushing to emerge into the tooling area. In a bid to effectively move along with the bar, the headstock will precisely move back and forth in the z-direction. While holding stationary on the Z axis, the tools sit in front of the guide bushing and behind it is the collet.

Vibration or deflection rarely occurs during machining as long as the part is held very firmly. This is often the case under CNC control. Gang slides may support live tooling. Apart from carrying fixed single-point tools, they are also responsible for transporting holders for other tools.

Many Swiss-style lathes have single or more turrets, back working tool stations, and a secondary spindle that can also transport more tools. The secondary spindle can be found behind the part along the Z axis. As the part is cut off, the secondary spindle picks it up and carries it for second operations. In order to avoid the need of a manual operator change on each part, it the back spindle will eject the part into a bin.

When it comes to the main machining operations, the lathe uses the main spindle along with the guide bushing. Swiss machines are generally known to be very efficient due to their ability to produce simple parts in one cycle. In other words, they have fast cycle times. With these machines, there is no need for second operations to finish the part with another machine.